Our chapter and this web site is dedicated to Mike Bernard..... 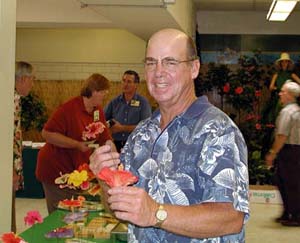 In 2000, Mike, along with Mrs. Lydia Boudreaux and Bobby Dupont got together and decided to form a hibiscus chapter serving the Acadiana region of Louisiana.  During the Festival des Fleurs, Mike convinced several people who attended to organize and form our chapter.  In the summer of 2000, the Acadiana Chapter was born and immediately became a member of the American Hibiscus Society.  Mike served as the first president for several years.  In September (or was it August) of 2000, we held our first show and sale at Cathedral-Carmel's High School gym.

In April 2003, sadly we lost Mike to cancer.  To honor Mike, the chapter decided to rename the chapter to the Mike Bernard Acadiana chapter.

In June 2003, our chapter received the official renamed charter from Roz Merritt, President of the American Hibiscus society.  Accepting are Sandra Theall and Rick Landers.

Our chapter has undergone many changes since 2000 with the election of new officers every October.  Everyone who has served as president has strived to keep one of Mike's dream alive which was to promote his great love of hibiscus.